Meta-bombing isn’t a new thing (the act of user reviews on Metacritic being shockingly low due to something unrelated to the game or something insignificant). Depression Quest however, is cruising on a impressive 1.1/10, mainly due to some very, very controversial allegations aimed at the developer, Zoe Quinn.

What is Depression Quest? It’s an START PERSONAL OPINION interesting END PERSONAL OPINION textbook ‘choose your own path’ game focused on how depression influences and damages lives. I actually played DQ months ago when it was a browser game, and the final Steam release seems to be the exact same thing. Zoe Quinn released it for free following the news of Robin William’s death.

Depression Quest has been controversial since it came out with people arguing over whether it was a game, or worth playing. As a female indie developer with growing success, Zoe turned into a sort of heroine of feminist gamers which come with their own controversy.

Eron Gjoni, her ex boyfriend, posted a blog in which he claims he was grievously wronged by Zoe and that she is a shitty, hypocritical person that cheated on him with her boss and journalists within the gaming community, backed up with proof you can read here. Clearly that post was then taken well by everyone online. 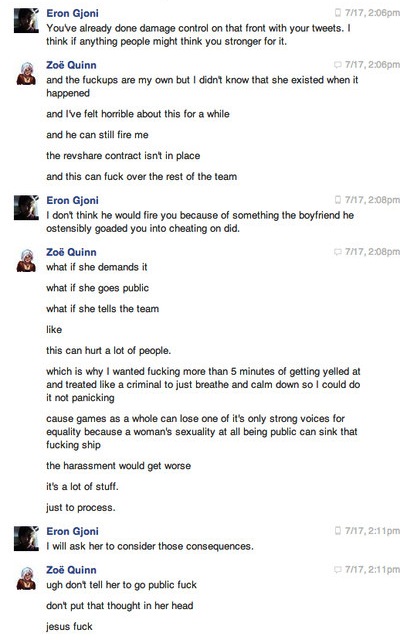 What followed next was a barrage of criticism, userscore bombings (looking at you, Metacritic), and some choice threats from the online base. The main accusation being that Zoe Quinn slept with these journalists (specifically one from Kotaku) in order to signal boost Depression Quest.

Now, going around threatening, prying and abusing someone online is not something that should be done, ever. No matter how drastic or controversial the issue.

However, the storm of coverup and shushing in this matter is nothing short of alarming, with many Reddit threads discussing this issue being completely deleted. It is a very sensitive issue, but it isn’t right to hush up free speech. We here at Press Start do not condone either actions, but we are forced to acknowledge both sides of the coin.

If the allegations are true, then it’s a very grave issue that professional journalists are willing to throw away their credibility and trust from readers for the sake of personal preference. However, these are allegations, with little proof with them. Just a lot of circumstantial evidence and hearsay. It is nobody’s business who sleeps with who, just to make that clear. Games journalism compromise however has relevance to gaming, which is related to an affair someone had. Zoe Quinn’s name in this should be nearly irrelevant. Included just for detail and thoroughness.

Phil Fish also had something to say, but he never shuts up about anything.

Further allegations have come up in an unrelated incident yet involving Ms Quinn, about a supposed Game Jam that was run by a group called Fine Young Capitalists that was ruined because of ‘direct’ intervention from Zoe. 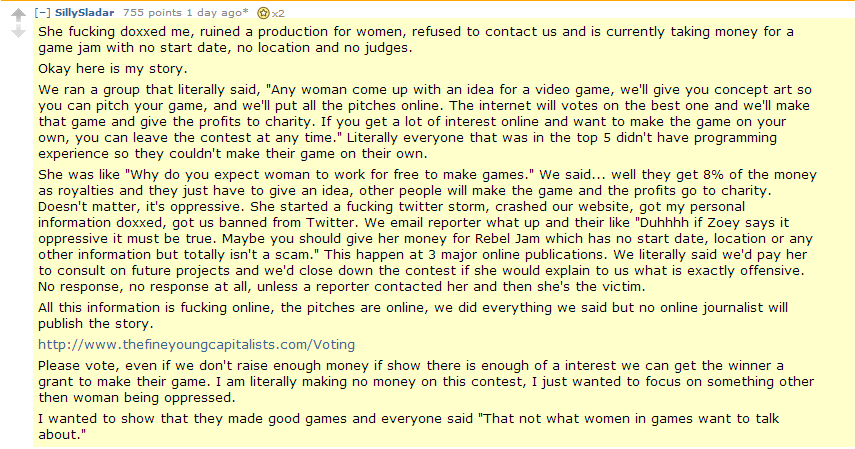 Again, this is just allegations being thrown around without pure facts backing it up, so anyone following the story must give Zoe a chance to answer these accusations. Anyone involved should also avoid attacking anyone in a personal manner, that much is obvious enough.